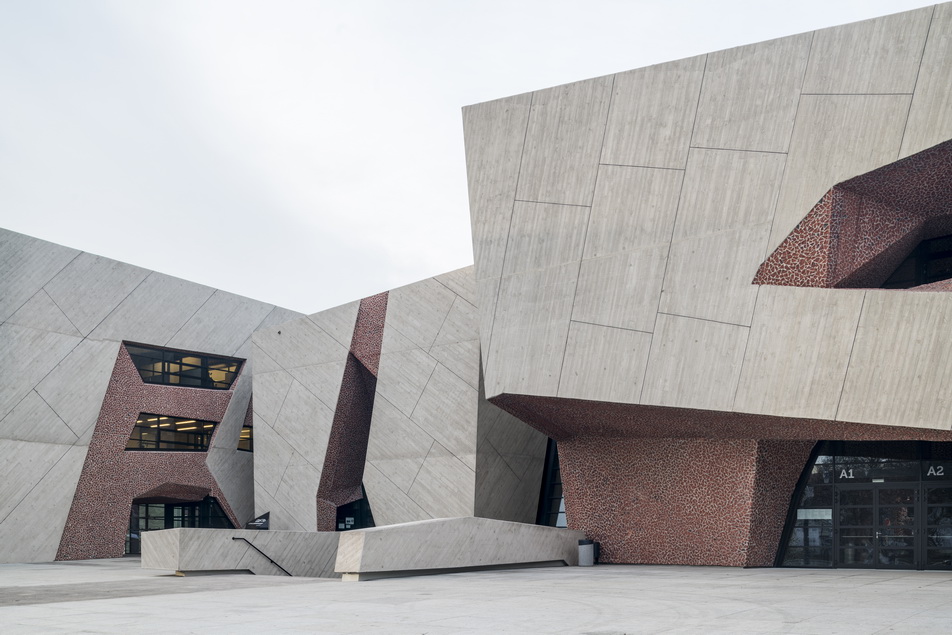 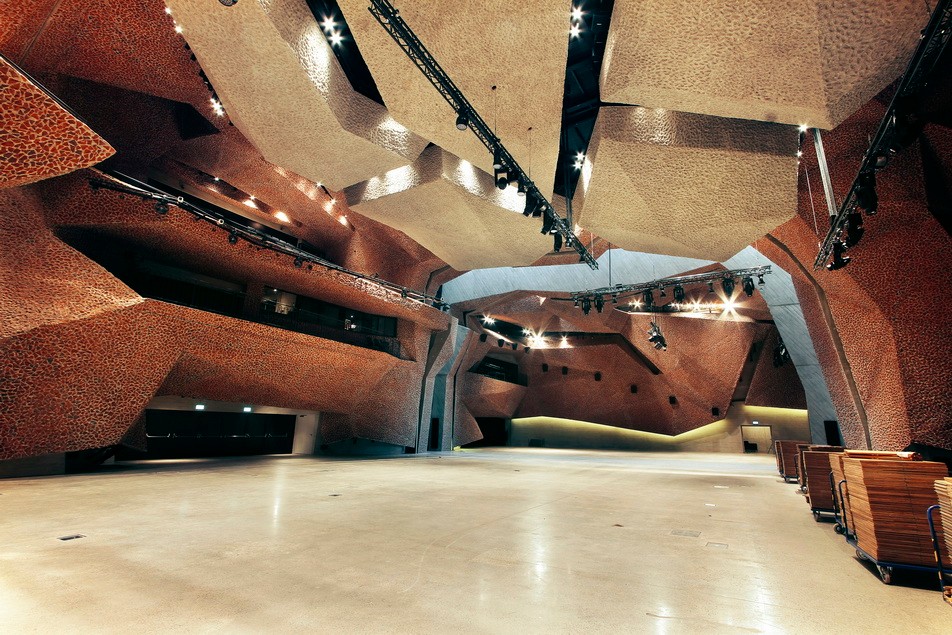 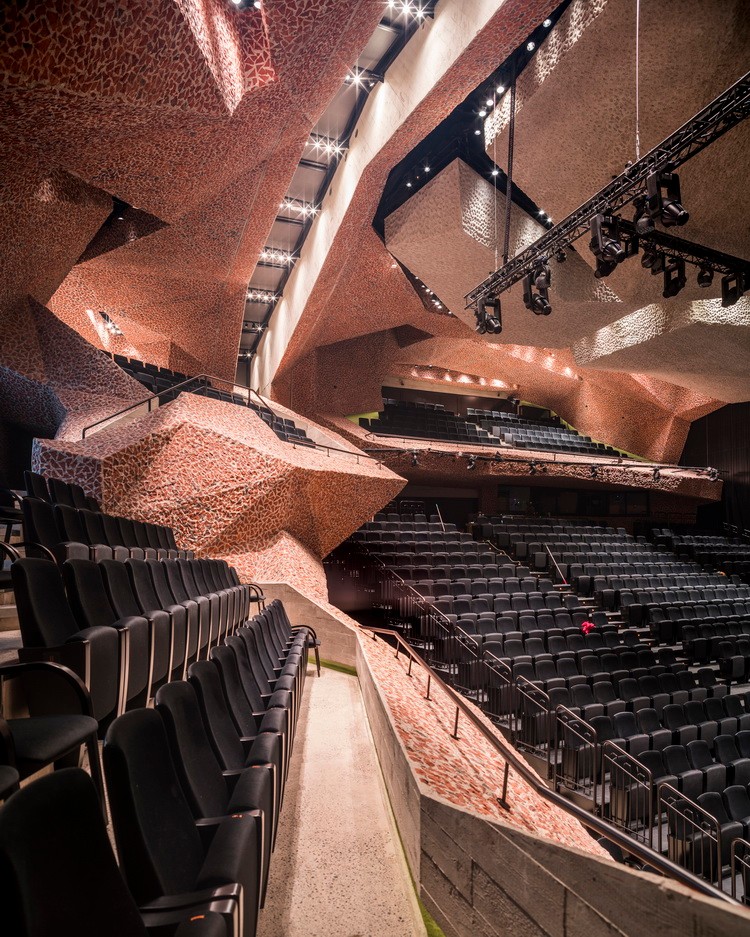 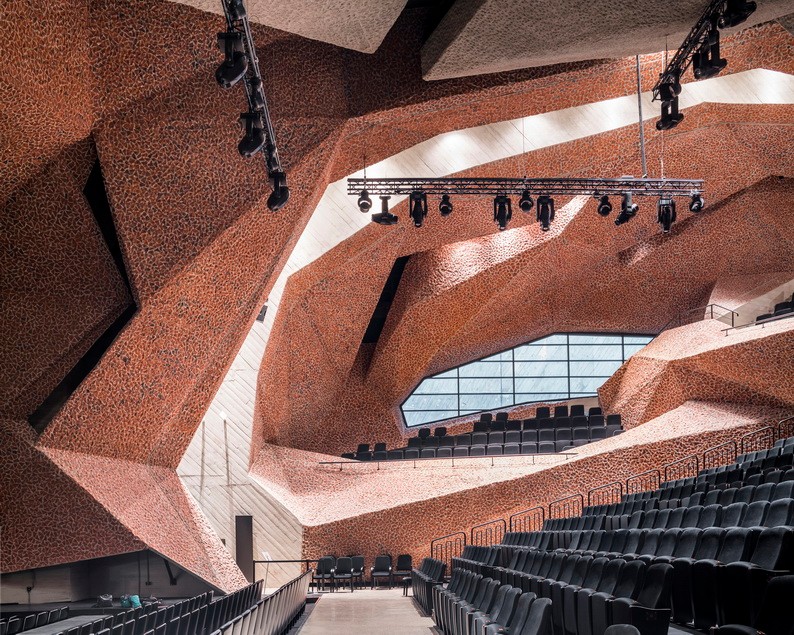 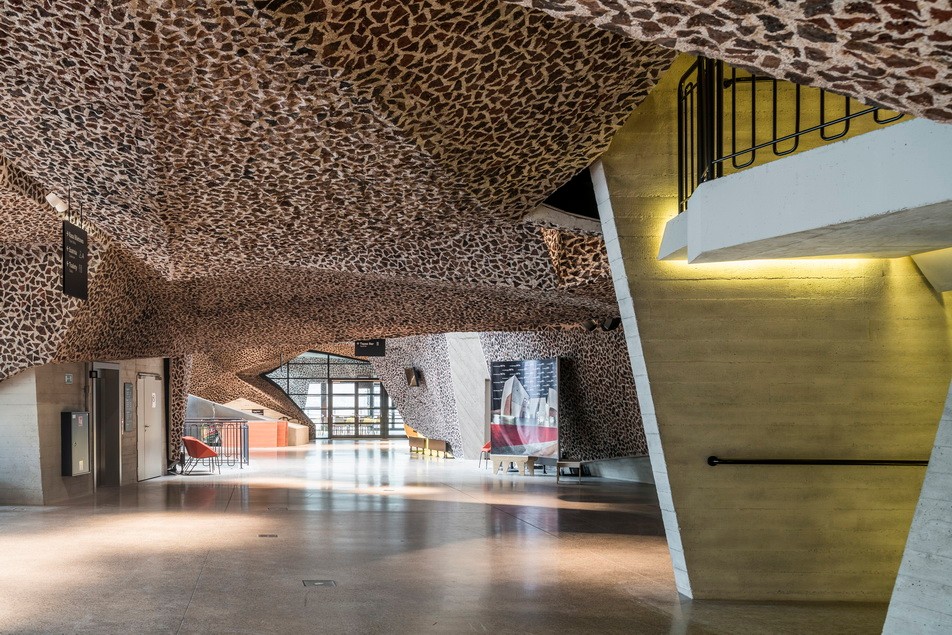 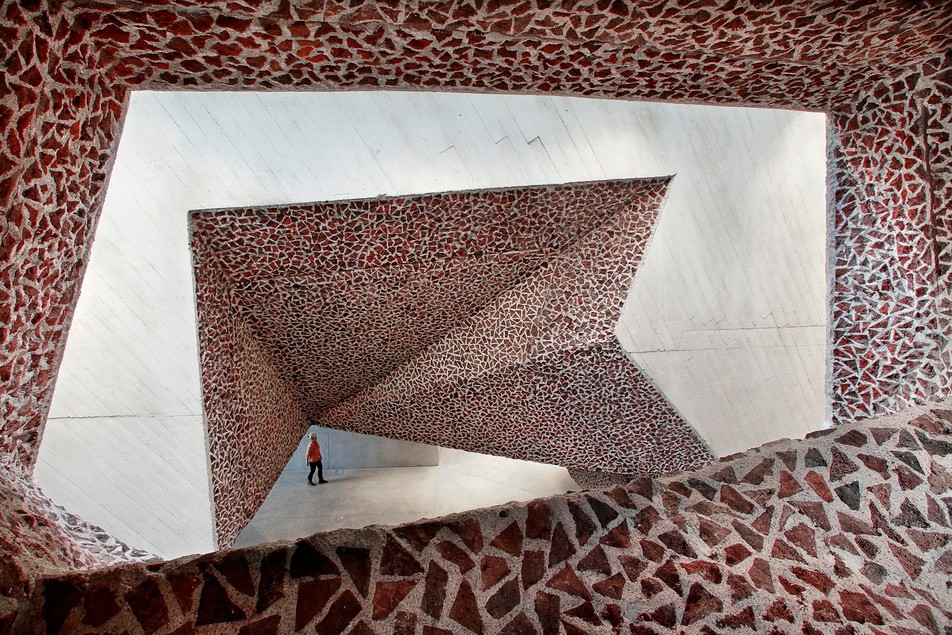 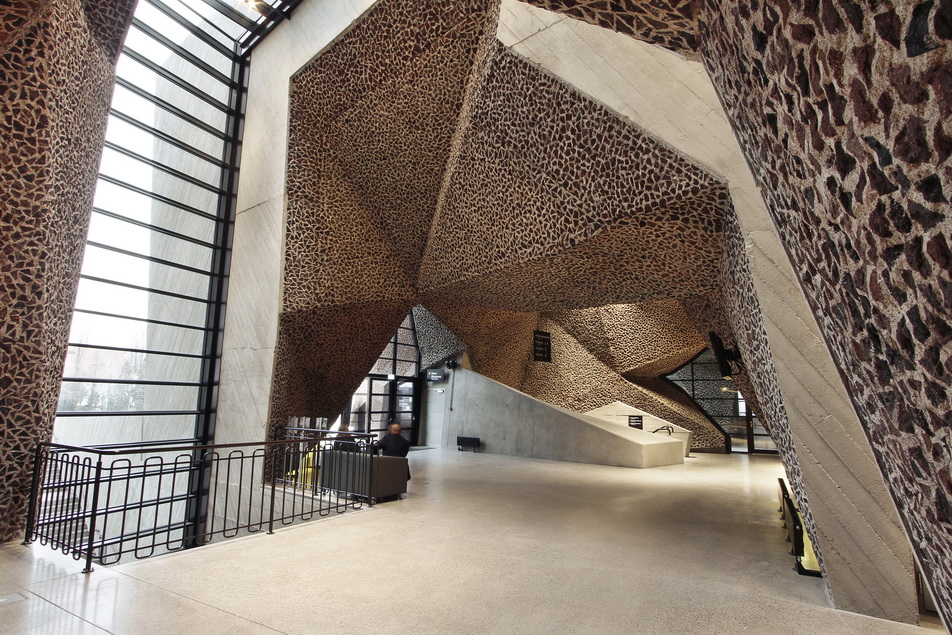 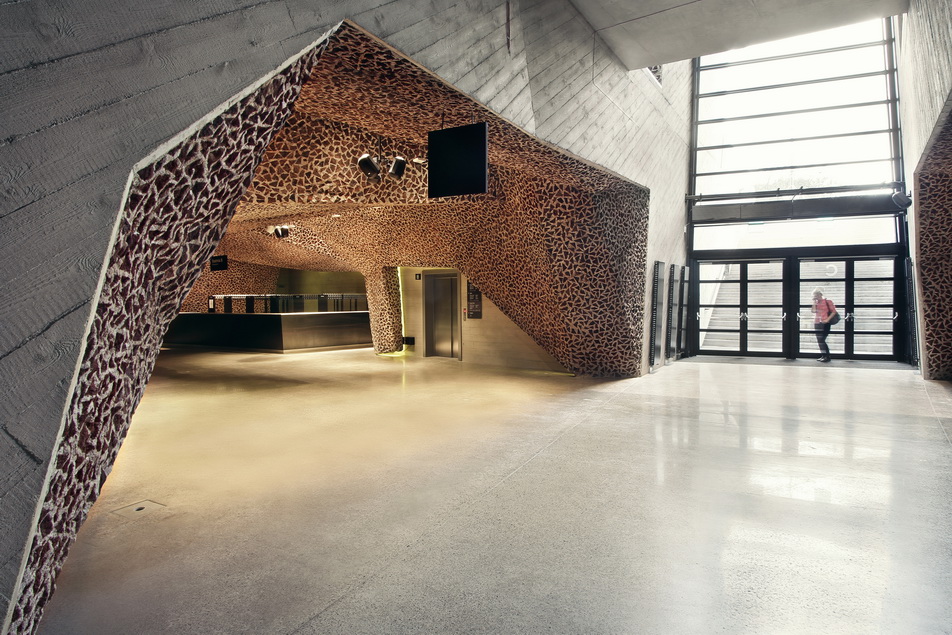 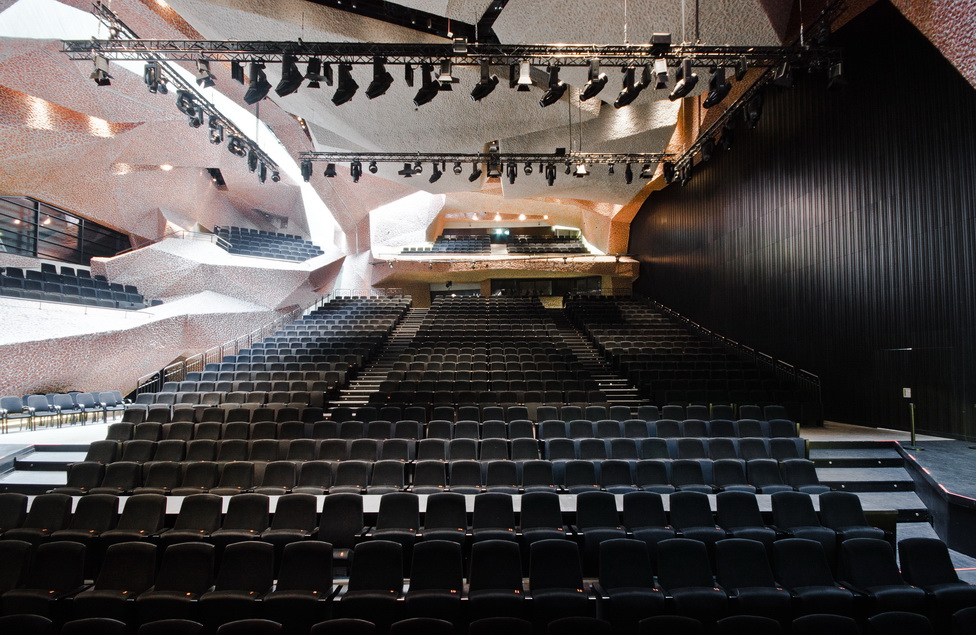 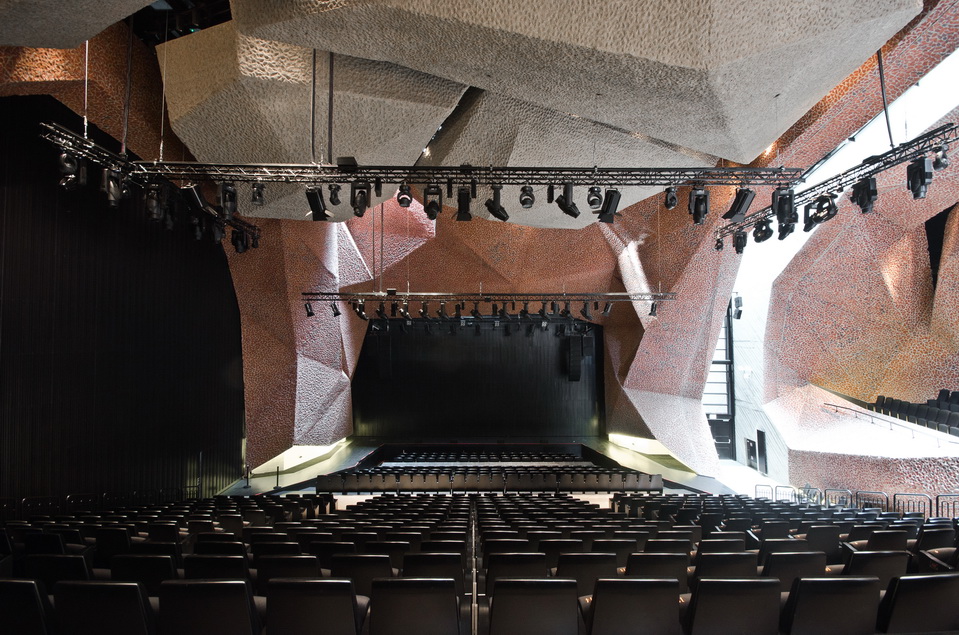 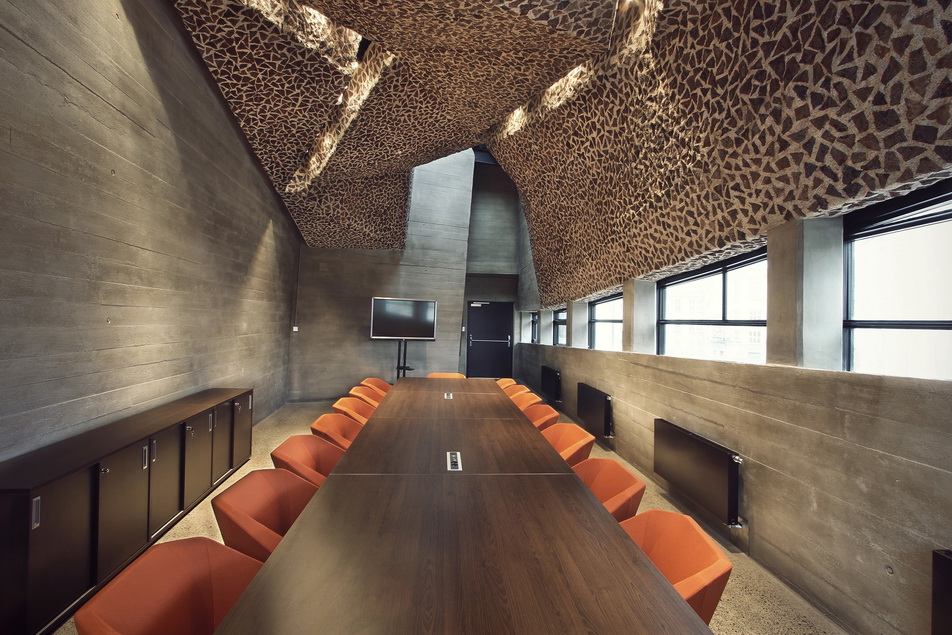 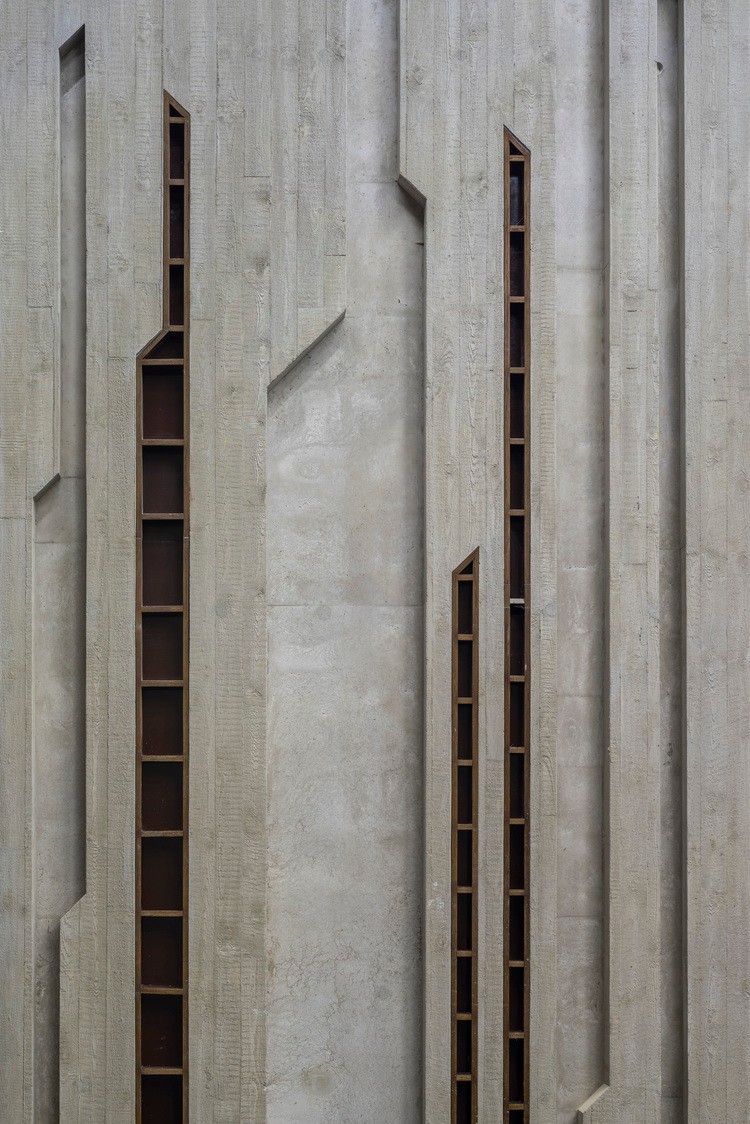 Set in a green ring around the centre of Torun, an UNESCO protected Polish town, that borders the new development of the city.  The project site is designed to cover the half of the area of the site. This is to give the remaining area to the park. A green arc is created to create views onto the Auditorium as well as to make the park appear larger. The views to the river stay untouched by having kept the building’s height the smallest possible. The small height, on the other hand, allowed the building to blend with the neighbourhood and the site, the visual effect achieved is that of a natural object, a rock.

The exterior is made of almost white concrete. As the concrete shell is cut and carved away, shades of red appear as the lining in its holes. The building’s use of material is a reinterpretation of the traditional use of brick, establishing a parallel between the tectonics of the city and the location of the plot. The interplay of colours, red and white, emphasizes the dichotomy between the modern and historic architecture. Menis uses to explain the volume of the concert hall through the experience of eating Zurek, a very popular dish, eaten in Poland. Zurek is a traditional soup served in a bun whose crumb has been removed and its outer shell is used as a bowl.

The program is characterized by a great flexibility at such extent that a building, which according to the client's brief, was meant to be only a concerts hall, ended up being a space for all kinds of concerts and events, within the same initial budget. First of all, the theatre space is able to adapt easily to different capacities. For instance you may join two rooms to act as the main theatre by moving the walls and changing the number of the easily removable seats. It is possible to hold several separate and simultaneous events. Secondly, thanks to its dynamic ceiling, the building can be tuned to effectively absorb symphonic performances, chamber, theatre, opera, and film and meet any acoustic requirements the theatre designer requires. Finally, the concert hall can open to the outside, allowing to join the interior stage with the park outside for outdoor performances.

The definition of the auditorium space and of its shapes was made through an interactive process, always in relation to acoustics, until reaching the final shape. To do this, we studied the first sound reflections and we also made a big model at 1/50 scale, we made acoustic studies of it, and, based on the results, we made the appropriate adjustments . This process was repeated up to eight times until purifying the geometry and achieving the final shape. The ultimate goal of the auditorium was getting a space where its multi-functionality would not bother and would entirely be appropriate in terms of acoustics and functionality, for all uses that were planned.

The plastic properties of concrete allows its use in concert halls in many different ways because it allows us to control the geometry (liquid stone) and adapt its shape to the formwork so that we can control the first sound reflections the listener received. In addition, the surface treatment of the crushed brick and concrete mix, allows us a kind of diffusion, very difficult to achieve with other materials. In the Baroque architecture this diffusion was achieved with décor, with ornamentation. In our building, on one hand, Baroque is rationalized and, on the other hand, wood is demystified, because we get the same, or better, sound effect by "chopping" the surface of the brick with concrete mix.

The moving parts of the auditorium have an area ranging from 80 to 140 m2, having a weight that varies according to the piece, from 11 to 20Tn. Each piece has got 5 anchoring points. They have been made of a steel skeleton that supports concrete coating, with a minimum weight of 140 kg / m2 due to acoustic requirements.  Each of the pieces can move independently from 3 to 5 m in height, allowing adjustment of the geometry and volume of the hall, depending on the needs of each moment, transforming a volume of 8200 m3, which provide a time reverberation of 1.85 seconds at 6,800 m3, so that the reverberation time is reduced to 1.35 seconds. By adding additional absorption you could reach a reverberation time of 1.2 seconds, which covers the entire range of possible activities:  1.85 seconds for symphonic music, 1.6 seconds for opera and 1.2 seconds for theater.

Picado, used in the entire building, is a mix of concrete and upcycled reclaimed red bricks from a local factory. The picado is an innovative technique, conceived by Fernando Menis, consisting of mixing concrete with other materials and break it afterwards. Besides achieving a rough expression, the picado allows excellent acoustics results. The first time Menis used it, was for Magma Art & Congress (Tenerife, Canary Islands, 2005), by mixing concrete with local volcanic stones. For the CKK Jordanki, the technique has been researched further, tested and certified by the Spanish and the Polish Building Research Institute -ITB, respectively. The red brick is present almost on all the fa?ades of the city and its use in CKK Jordanki is Menis's contemporary reinterpretation of this traditional material while a clear reference to the town's cultural heritage 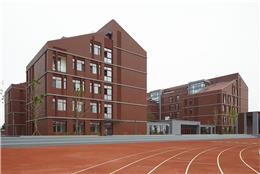